Fatal Occupational Injuries on the Rise 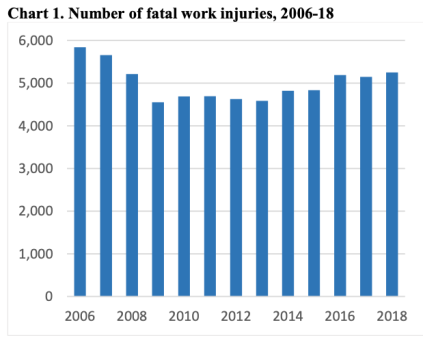 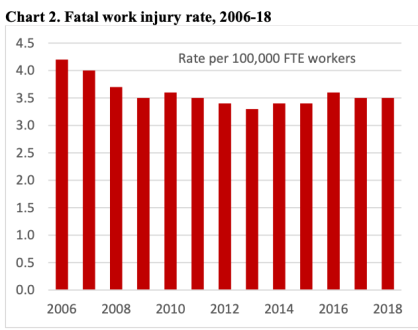 There were 5,250 fatal work injuries recorded in the United States in 2018, a 2% increase from the 5,147 in 2017, the U.S. Bureau of Labor Statistics reported. (See chart 1 and table 1.) The fatal work injury rate remained unchanged at 3.5 per 100,000 full-time equivalent (FTE) workers. (See chart 2.) These data are from the Census of Fatal Occupational Injuries (CFOI), released in December, 2019.
Fatal event or exposure 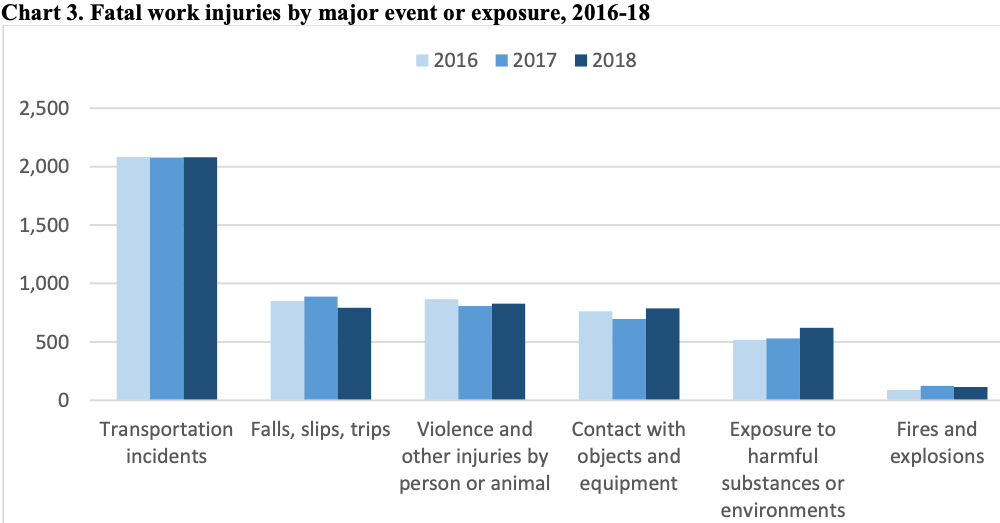 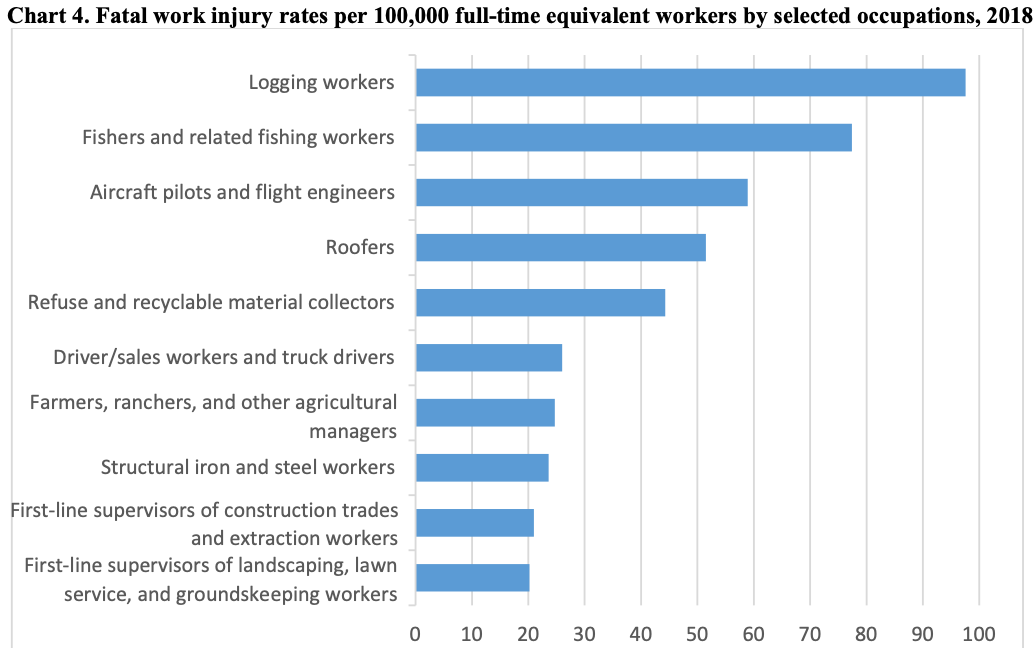 Annual training is required by 40 CFR 262.17(a)(7).  Learn how to complete EPA’s new electronic hazardous waste manifest, and the more than 60 changes in EPA’s new Hazardous Waste Generator Improvements Rule.  Environmental Resource Center’s Hazardous Waste Training is available at nationwide locations, and via live webcasts.  If you plan to also attend DOT hazardous materials training, call 800-537-2372 to find out how can get your course materials on an Amazon Fire HD 10 tablet at no extra charge.
Cannabis and Δ9-THC Listed as Reproductive Hazard

Effective January 3, 2020, California’s Office of Environmental Health Hazard Assessment is adding cannabis smoke and Δ9-tetrahydrocannabinol (Δ9-THC) to the list of chemicals known to the state to cause reproductive toxicity (developmental endpoint) for purposes of the Safe Drinking Water and Toxic Enforcement Act of 1986 (Proposition 65). Cannabis was previously listed as a carcinogen.
At a public meeting on December 11, 2019, the Developmental and Reproductive Toxicant Identification Committee (DARTIC) in its official capacity as the “state’s qualified experts” determined that cannabis (marijuana) smoke and Δ9-tetrahydrocannabinol (Δ9-THC) were shown to cause reproductive toxicity based on the developmental endpoint. Regulations for the listing of chemicals by the DARTIC are set out in Title 27, California Code of Regulations, section 25305(b)(1).
A complete, updated Proposition 65 chemical list is available on the OEHHA website at https://oehha.ca.gov/proposition-65/proposition-65-list.
Georgia Tire Distribution Center Cited for Fall, Struck-By and Other Workplace Hazards

OSHA has cited Mavis Southeast LLC – operating as Mavis Discount Tire – for exposing employees to fall, struck-by and other hazards at the company’s distribution facility in Buford, Georgia. The company faces $191,895 in penalties.
OSHA cited the tire company for exposing employees to fire hazards by failing to ensure emergency exits were not blocked and there was signage to the nearest exit. Other violations include exposing employees to struck-by and crushing hazards from damaged storage shelving, and failing to inspect fall protection equipment, train employees on the safe operation of powered industrial trucks, and mark aisles and passageways.
"Implementing comprehensive safety and health programs that include steps for identifying and eliminating hazards protects workers, and can help prevent injuries and illnesses," said OSHA Area Director William Fulcher, in Atlanta-East.
OSHA provides compliance assistance resources on safely operating a forklift, warehouse operations, and materials handling and storage.
Florida Roofing Contractor Cited for Repeatedly Exposing Employees to Fall Hazards

OSHA has cited CJM Roofing Inc. – based in West Palm, Florida – for exposing employees to fall and other hazards at three residential worksites in Royal Palm Beach and Port St. Lucie, Florida. The contractor faces penalties totaling $291,724.
OSHA initiated inspections in June, August and September of 2019, as part of the Regional Emphasis Program for Falls in Construction, after inspectors observed employees working on roofs without fall protection. OSHA cited the company for failing to use a fall protection system, ensure that portable ladders extend above the upper landing, require that employees wear eye and face protection when operating pneumatic nail guns, and conduct regular inspections of the jobsite. OSHA has inspected the company five times in the past five years, resulting in repeat violations of the fall protection standard.
"Companies that fail to comply with safety and health requirements are placing workers at risk for injuries and illnesses," said OSHA Fort Lauderdale Area Director Condell Eastmond. "This employer must take immediate action by conducting required hazard assessments and correcting dangerous working conditions."
"OSHA's educational resources are readily available to all employers and workers to understand how to provide a safe work environment and ensure compliance with the law," stated Principal Deputy Assistant Secretary of Labor for Occupational Safety and Health Loren Sweatt.
Information on how to identify workplace hazards and implement safety and health programs is available on OSHA's Recommended Practices for Safety and Health Programs webpage.
Smelter Cited for Exposing Employees to Lead, Arsenic and Other Hazards

OSHA has cited Mayco Manufacturing LLC – operating as Mayco Industries Inc. – for exposing employees to lead and arsenic in addition to machine, electrical and fall hazards. The Granite City, Illinois, lead smelter faces $223,148 in penalties for 18 serious health violations.
OSHA received a report that employees suffered caustic burns from water mixed with sodium hydroxide used to extinguish a fire. OSHA cited the company for failing to monitor for arsenic and maintain lead exposures below permissible exposure limits; train employees on arsenic and other chemical hazards; keep surfaces clean from lead and arsenic; and check the effectiveness of ventilation systems. OSHA also cited the company for failing to implement adequate medical surveillance procedures; keep adequate lead exposure air-monitoring records; assess respiratory hazards in other work areas; and provide an emergency eyewash station.
“Extended exposure to toxic metals can cause health disorders, such as impaired kidney, lung and nerve function, and can be fatal,” said OSHA Area Director Aaron Priddy in Fairview Heights, Illinois. “It is vital for the safety and health of workers that employers comply with OSHA’s standards on toxic and hazardous substances, and develop a comprehensive safety and health program to address all hazards in the workplace.”
OSHA’s lead and arsenic webpages provide information on what employers must do to limit worker exposures.
The company has 15 business days from receipt of the citations and penalties to comply, request an informal conference with OSHA’s area director or contest the findings before the independent Occupational Safety and Health Review Commission.
North Dakota Grain Facility Cited After Employee Fatality 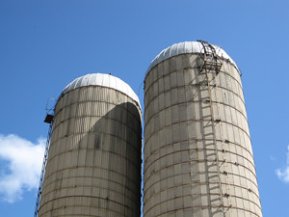 OSHA has cited Columbia Grain International (CGI) LLC for willfully exposing workers to grain-handling hazards after the fatal engulfment of an employee at the company’s Arvilla, North Dakota, storage facility. The company faces $190,000 in proposed penalties.
OSHA inspectors determined that CGI failed to follow OSHA standards during grain bin entry and cleaning operations. OSHA issued a willful citation for allowing employees to “walk the grain” and for not preventing contact with operating machine parts by locking out the bin’s conveyor system. Violations related to walking/working surfaces, ladder use, machine guarding, bin entry procedures and bin rescue procedures resulted in serious citations.
“This tragedy could have been prevented if the employer had simply followed well-known safety procedures,” said OSHA Area Director Scott Overson in Bismarck, North Dakota. “Instead, they exposed employees to dangerous hazards that resulted in the loss of life.”
OSHA’s Grain Handling webpage provides resources on recognizing and controlling hazards in the grain industry. OSHA is collaborating with the National Grain and Feed Association, Grain Elevator and Processing Society, American Feed Industry Association, and the Grain Handling Safety Coalition to identify potential hazards at grain, feed and processing facilities through the Stand-Up for Grain Safety Week slated for April 13-20, 2020.
CGI has 15 business days from receipt of the citations and penalties to comply, request an informal conference with OSHA’s area director or contest the findings before the independent Occupational Safety and Health Review Commission.
Proposition 65 Safe Use Determination for Styrene in Fiber Care Baths, Inc. Bathware Products