A large part of industrial hygienists’ work consists of measuring workers’ occupational exposure levels. The high variability in measured levels poses a considerable challenge when it comes to interpreting them relative to occupational exposure limits (OELs). Despite the existence of a consensus-based framework for this purpose, the associated approaches have not been widely adopted by industrial hygiene practitioners. They require calculations that are not feasible with current tools, and the statistical results obtained can be difficult to communicate to workers and managers.
The aim of the WebExpo project, funded by the Institut de recherche Robert-Sauvé en santé et en sécurité du travail (IRSST), was to improve current practices in the interpretation of occupational exposure measurements by creating a library of algorithmic solutions for the most frequent calculations performed in industrial hygiene risk assessment.
WebExpo used Bayesian statistics to perform the data interpretation calculations. “Bayesian methods were chosen because they provide direct answers to questions such as “What are the chances of this group of workers being overexposed?” or “What are the chances of my intervention reducing exposure by half?” This type of information makes it much easier to communicate risks to non-specialists,” explains Jérôme Lavoué, principal investigator and associate professor at the École de santé publique de l’Université de Montréal (ESPUM). “Bayesian statistics also address methodological questions that are rarely given sufficient consideration, particularly when it comes to non-detect values and the management of measurement error.”
The researchers involved in the WebExpo project set themselves three main objectives:
“The three objectives were attained and generated concrete results. For example, the list of pertinent calculations obtained from the first objective was used to develop mathematical formulae, which were then translated into algorithms. These, in turn, were used to create functional prototypes, which are all available free of charge on the Internet under open licence,” added Mr. Lavoué.
The WebExpo project should provide the industrial hygiene community with a comprehensive toolkit for interpreting occupational exposure levels. “What distinguishes the outcome of this study is that it offers users the flexibility of creating or adapting their own software instead of having to use a new one. A knowledge transfer project currently under way is also seeking to use WebExpo algorithms to create an IRSST Web application for interpreting exposure data.”
Free Amazon HD 10 Tablet with RCRA and DOT Training

Annual training is required by 40 CFR 262.17(a)(7).  Learn how to complete EPA’s new electronic hazardous waste manifest, and the more than 60 changes in EPA’s new Hazardous Waste Generator Improvements Rule.  Environmental Resource Center’s Hazardous Waste Training is available at nationwide locations, and via live webcasts.  If you plan to also attend DOT hazardous materials training, call 800-537-2372 to find out how can get your course materials on an Amazon Fire HD 10 tablet at no extra charge.
Foundry Fined $27,500 for Safety Violations Following Explosion 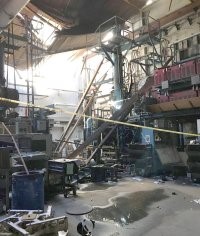 Oregon OSHA has fined an Albany foundry $27,500 for violating job safety rules. The citation against Selmet Inc. follows an investigation of a furnace explosion that injured two workers, one of whom suffered second- and third-degree burns to his body.
The division’s investigation of the Aug. 15, 2019, accident identified three serious violations by Selmet. Those violations included failing to account for employee safety in the layout and design of the foundry, and overlooking proper work clothing and equipment.
“There are concrete steps employers can take to make safety a meaningful part of the operation of a work site,” said Michael Wood, administrator for Oregon OSHA. “Neglecting such steps, as this case demonstrates, serves only to invite more risk and the severe consequences that frequently come with it.”
The worker who suffered severe burns was operating a furnace – powered by high-voltage electricity – to melt titanium. He was doing so in a part of the foundry that contains older furnaces and where employees use control panels that are near each furnace. The furnace experienced a system failure that leaked water used for cooling into a vacuum chamber. The reaction of molten titanium with water triggered the explosion.
The blast, which blew the roof off part of the building, left the worker with multiple burns to his head, neck, arms, and chest. The force of the blast threw another worker, stationed at the operating panel of another furnace, into a parts table.
Oregon OSHA cited Selmet for failing to account for safety measures in the design, layout, and operation of the older furnaces. Such measures could include blast walls to protect against explosions, isolated control rooms, or removal of employees from the risk zone during operations. The company had installed such measures for newer furnaces, according to Oregon OSHA’s investigation.
That serious violation carries a $13,750 penalty. Oregon OSHA also fined Selmet $13,750 for two related serious violations involving a lack of appropriate work clothing and personal protective equipment for furnace operators.
The total proposed fine of $27,500 reflects a 10 percent increase in the base penalties assigned to the violations. The increase reflects Selmet’s negative history of nine reportable accidents in the last three years.
Mulch Manufacturer Cited for Exposing Employees to Amputation and Struck-by Hazards

OSHA has cited Garick LLC – operating as Smith Garden Products – for exposing employees to safety hazards at the Cumming, Georgia, facility. The manufacturer of specialty mulch products faces $148,867 in penalties.
OSHA cited Garick LLC for failing to ensure energy control procedures contained clear and specific steps to limit the release of hazardous energy. OSHA also cited the company for failing to provide and ensure that employees affixed lockout/tagout devices to block machines and equipment from energy sources, train employees to recognize applicable hazardous energy sources, and conduct a periodic inspection of the lockout program at least annually. Other violations included failing to ensure machinery was effectively guarded, allowing employees to operate defective powered industrial trucks, and failing to reduce compressed air to the appropriate level before allowing employees to use it for cleaning purposes. OSHA conducted the inspection in accordance with the National Emphasis Program on Amputations and the Regional Emphasis Program for Powered Industrial Trucks.
"Employers must implement comprehensive safety and health programs to readily identify and correct hazards in the workplace to prevent injuries or fatalities," said OSHA Atlanta-East Acting Area Office Director Michael Hejazi.
OSHA has compliance resources on how employers can control the release of hazardous energy, and how to protect workers from unguarded machines and damaged forklifts.
Safety News Links
Think All BPA-free Products Are Safe? Not So Fast, Scientists Warn
Health and Safety Consequences of the Gig Economy
Corona Virus Testing
Determination of Particulate Filter Efficiency Level for R95 Series Filters
Workers Comp: not in Texas
Worker Injured, Rescued after Hand Became Trapped in Mechanical Equipment
Jan 25
2021